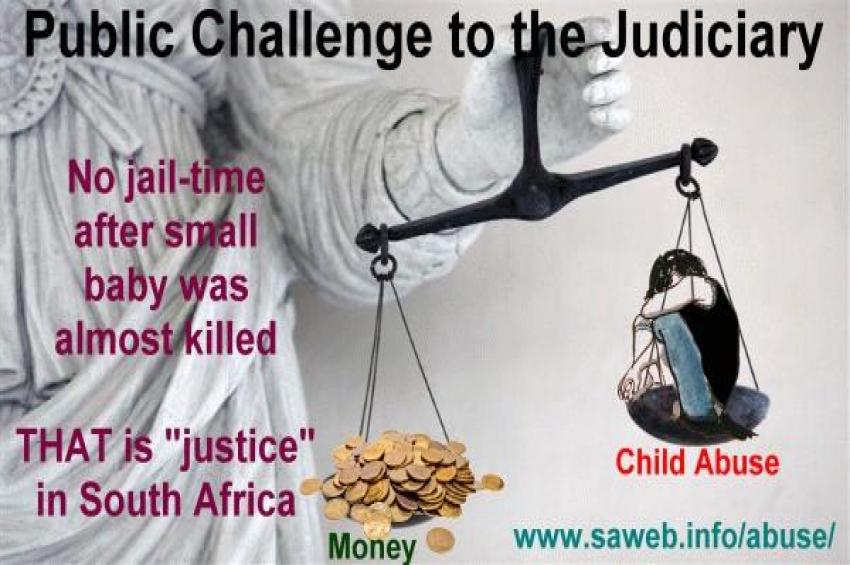 Slap On The Wrist

Pretoria - The Centre for Child Law has urged the State to appeal the judgment and sentence of a mother and father who escaped jail time after they were convicted of being accessories to the attempted murder and serious assault of their two-month-old babies.

In the High Court in Pretoria last week, Judge Eben Jordaan handed the duo a five-year prison sentence, which was wholly suspended, of which three years would be under correctional supervision.

The twins, however, known as Baby J and Baby M, are still in the care of the mother as well as their grandparents.

They were only 11 weeks old when the assault began.

Baby J was rushed to hospital on Christmas morning in 2012 with a cracked skull and brain bleed. His head injuries caused permanent brain damage.

Baby J cannot walk, stand or crawl - he is unable to talk and just makes noises. He can also not eat on his own as he can't chew and cannot swallow properly, which makes him very prone to choking.

Jordaan also noted that he had a minimal to zero immune system and would need 24-hour care, seven days a week.

The court found multiple assaults had taken place on baby J and that the serious brain damage nearly caused his death.

His sister had several fractured ribs, which occurred through the use of extreme force. Medical experts testified that baby's ribs were difficult to fracture because of the thoracic elasticity of a baby.

'Beyond a reasonable doubt'

In his judgment, Jordaan said all the medical evidence proved beyond a reasonable doubt that the twins had been assaulted.

Jordaan said the assaults were committed by the accused and that it could have been either the mother or the father or both. However, the evidence did not show or prove who assaulted the babies. It was not clear who the perpetrator was.

Both parents, who claimed to have no knowledge of the assault and claimed they did not assault baby M or attempt to murder and assault baby J, were unreliable witnesses, said Jordaan.

Jordaan said the only conclusion that could be reached was that both accused know what happened to the babies but advanced a false version to either protect one another or to escape culpability.

He said the assaults most likely took place in a state of rage.

Because the state had failed to prove who had done what to the babies, Jordaan convicted both parents of being accessories to attempted murder and serious assault.

In terms of the sentencing, Jordaan said while what had been done to the infants was horrific, he had to take the best interest of the children into consideration as their mother was their primary caregiver and their father contributed to the children financially.

But Professor Ann Skelton of the Centre for Child Law said the outcome of the "tragic" case was shocking.

Skelton questioned how, if the twins were in the care of their parents and no explanation of accidental injury was offered, the court was able to find them guilty of being accessories to the crimes and not the perpetrators of the crime.

She further said while the courts were required to consider the best interests of the child when considering the imprisonment of a primary caregiver, it was clear that in this case the grandparents were caring for the children.

She said therefore it was clear that the principle of considering the child's best interest had been "misapplied".

Skelton urged the Director of Public Prosecutions to appeal on both the merits and the sentence.

Operations director of Women and Men against Child Abuse, Vincentia Dlamini said the judgment was ridiculous and disappointing and that both parents got away with a slap on the wrist for their brutality.

"Our courts need to set a precedent to would-be abusers that any form of child abuse will have serious consequences," said Dlamini.